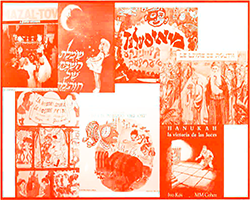 The First International Symposium on Jew­ ish Children's Literature, which met for a full day on July 4, 1990, during the First In­ternational Conference of Judaica and Isra­eli Librarians (July 2–6, 1990), was the culmination of a year-long study on the state of children's literature with Jewish content in all countries with a Jewish population -- except for Israel and the United States, which were not included because this information is readily available. An article on children's literature in Israel, "Leading Israeli Children's Authors," by Dr. Jaqueline Shachter Weiss, appeared in Judaica Librarianship (Weiss, 1985), and a second article, ""Forty Years of Children's Literature in Israel: Genres, Trends, and Heroes," by Dr. Shlomo Harel, appears in this issue.

This work is licensed under a Creative Commons Attribution-NonCommercial 4.0 International License.