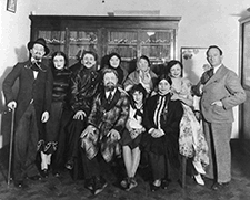 Yiddish book culture did and does exist in Western Canada, even outside the vibrant Jewish culture of Winnipeg, in communities whose geographic isolation from the Yiddish-speaking centers may seem extreme. Two libraries may serve as examples of the variety of manifestations of Yiddish reading in these localities: the library of the farm community of Edenbridge, Saskatchewan, which may be said to be emblematic of cultural organization in these rural colonies, which existed from before World War I until the 1960s; and the Kirman Library at the Vancouver Peretz Centre for Secular Jewish Culture, itself an unusual example of a Yiddish secular school, which is now the last specifically Yiddish library in Western Canada. Finally, the meaning of Yiddish books in these independent libraries, far from institutional support or a critical mass of Jews, is examined.